The world of milling and machining was forever changed with the introduction of computer numerated control, otherwise known as CNC Milling. Computer numerated control is a process in which a computer takes input from a Computer Aided Design (CAD) software and converts it into numbers, which are then used as coordinates that control the movement of the cutter of the machine. Motion is created among multiple axes (a differing amount depending on the type of machine being used) and a spindle which is used to do the actual drilling.

The orientation of the mill being used has a great affect on the product being made. A vertical mill simply means that the spindle axis on the mill is vertically oriented. Milling cutters are positioned on the spindle of the vertical mill, allowing the machine to easily cut into the material as needed. The shape, angle, and size of the milling cutter are all dependent on the type of product being made, with the different characteristics amounting to different textures and coatings.

Whether or not the spindle is mobile is dependent upon the type of vertical mill being used. With a turret mill, the spindle is stationary while the table below it moves both perpendicular and parallel to the spindle axis. A quill is usually found in turret mills, which allows the milling cutter to move up and down as needed. The turret mill allows items to be vertically cut either by the milling cutter moving vertically or the table moving vertically. The turret mill is the most versatile vertical mill; however, they are most effective when the machines remain relatively small, so that the tables and the spindle have easier mobility.

Horizontal mills function almost the same way as vertical mills, except that the cutters are mounted on a horizontal arbor. Instead of drilling into an object, an arbor shaves unwanted material from a project off, which is why it’s horizontal instead of vertical. Horizontal mills also include a universal table, which allows the product to be cut at various angles and adds to the versatility of the machine. 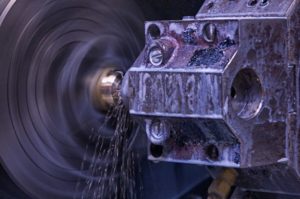 With 3-D printing, you can currently only work with materials such as ABS plastic, PLA plastic, and some metals. While it may be possible to print with a desired metal, cnc machining can achieve a stronger, more durable and cleaner product when finished that most standard 3-D printers cannot.

CNC machining offers precise machining capabilities that allow you to determine what type of quality of part you need, depending on the purposes it will serve. It even allows you to vary that quality within different areas of the part, giving you the precise measurements, look and feel for your application. On the other hand, 3-D printing works on the premise of building layers and utilizing layers to build a product (smaller layers are stronger than larger layers). Because it cannot vary the height of those layers without completely compromising the product, you are not able to change the quality of different areas within a part, further eliminating customizability.

3-D printing may be the newest trend in prototyping and part manufacturing, but nothing beats the quality, precision, speed and flexibility of cnc machining and manufacturing. Whether you’re looking for a complex part that’s never been made before or a stock piece for your machining equipment, cnc machining can provide the best part to get the job done.